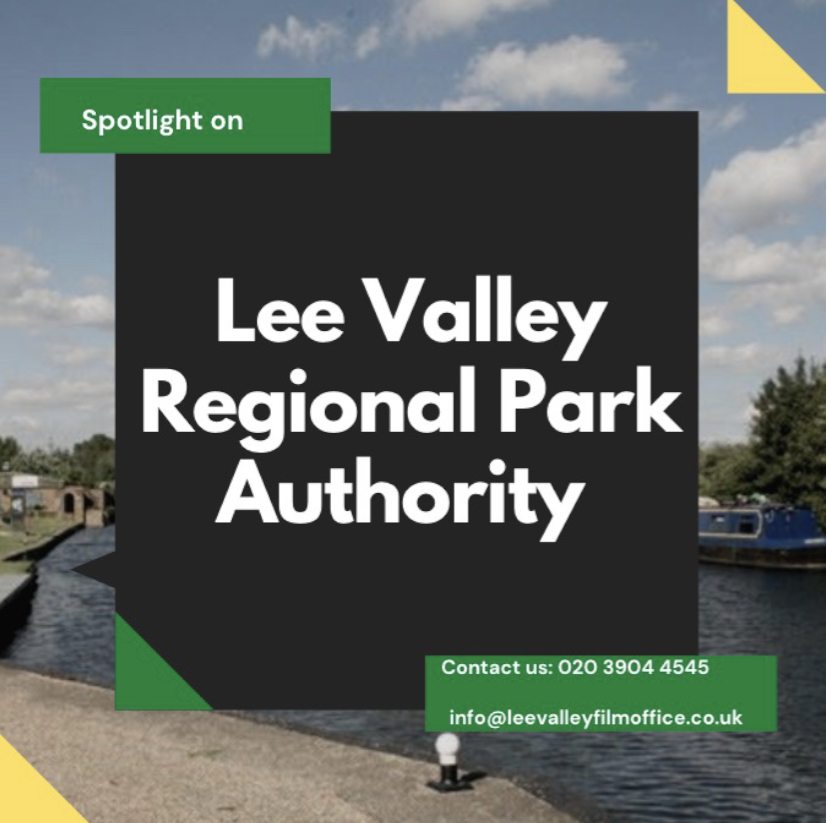 Some of the most photographed types of location in the film and TV industry are green spaces and other open spaces. In an urban environment like London, it can be difficult to identify locations that can effectively portray the countryside. This is where the breathtakingly beautiful Lee Valley Regional Park comes in.

The 26-mile, 10,000-acre park boasts a multitude of open spaces and waterways with marshes, nature reserves, gardens, parks, reservoirs and canals included in its portfolio. The park was created by the Lee Valley Regional Park Bill, passed by Parliament in 1966 as a “green lung” for London, Essex, and Hertfordshire. Over the last half century, the park was transformed from industrial wastelands into the award-winning spaces they are today; including the additions and improvements made for the 2012 Olympic Games. The vast number of sites run from East India Dock Basin upon the Thames to the Olympic Park in Stratford, Myddelton House and Waltham Abbey next to the M25, and then all the way up to Rye House Gatehouse between Luton and Chelmsford.

The estate can also be a gem for a Location Manager looking to perform a night shoot, big stunt sequences or drone filming. Eton Manor Walk runs from Hackney Marshes to the south of the Velodrome with the latter portion accessible by car, plus it sits over a dual carriageway. Similarly, Lee Park Way is a 1.5km, two-lane road that is not open to the public and which runs under a series of gigantic pylons along a canal. The fully controllable nature of the road means stunts can be performed easily and, as there are no residential properties nearby, it can facilitate night shoots. There is very little that couldn’t be shot at Lee Park Way!

The South area includes three London 2012 legacy sports sites – the VeloPark, the Hockey & Tennis Centre and the Athletics Centre. These impressive structures were built specifically for the Olympics and have world class facilities that also perfectly suit both location filming and facilitating shoots. These spaces include: changing rooms, green rooms, catering and large unit bases.

Lee Valley is blessed with several further delights – from the Marina next to Walthamstow Marshes, a Golf Course and several lakes to the aforementioned East India Dock Basin; which provides a remarkable panorama looking across Canary Wharf, the City and The O2 Arena. Head North and you’ll also find the White Water rafting centre and Lee Valley-operated farms, campsites, caravan parks and even impressive stately manor houses.

When we quote a shoot at a leisure facility, it is important for us to factor in ‘loss-of-income’ as well. For example, the booking of a court, pitch, track or even full closures of the venue would render those spaces inaccessible to public users. These sites were left open, after the Olympics, to provide leisure facilities for the public. As such, if the whole site is required to be shut down for a period then the location fees have to be set substantially higher, to ensure the revenue generated can go back into improving the amenities for the public.

Each specific location in the park has its own dedicated Ranger. This individual makes decisions about the space along with the two Senior Rangers – Ges and Simon – who represent the sites South and North of the M25 respectively. Unlike many open spaces within FilmFixer’s remit, the majority of sites in Lee Valley are conservation areas, so the Rangers always have the final say; South Ranger, Tim Crane commented:

“When considering film requests, a lot depends on the size of shoot and how it may affect the environment. This includes if the ground is dry enough for vehicles and crew trucks to park, and whether they obstruct members of the public using the green spaces. The size of the crew and cast is also important, as the larger the production the greater impact it will have on the ground. Preserving the biodiversity on our sites is a priority, and any shoots that can potentially damage a site are not permitted. Residents are also notified if a shoot may cause some disruption. From our side, it acts as a useful revenue stream and it is satisfying to see our range of locations on screen.”

Lee Valley is certainly an unlikely gem in London, running from the heart of the capital and easily accessible by units from the studios at Leavesden, Elstree and Three Mills. Film friendly, huge unit bases and the ability to depict both city landscapes and the rural heart of Britain – Lee Valley couldn’t be better positioned for location filming.

This website uses cookies to improve your experience while you navigate through the website. Out of these, the cookies that are categorized as necessary are stored on your browser as they are essential for the working of basic functionalities of the website. We also use third-party cookies that help us analyze and understand how you use this website. These cookies will be stored in your browser only with your consent. You also have the option to opt-out of these cookies. But opting out of some of these cookies may affect your browsing experience.
Necessary Always Enabled
Necessary cookies are absolutely essential for the website to function properly. This category only includes cookies that ensures basic functionalities and security features of the website. These cookies do not store any personal information.
Non-necessary
Any cookies that may not be particularly necessary for the website to function and is used specifically to collect user personal data via analytics, ads, other embedded contents are termed as non-necessary cookies. It is mandatory to procure user consent prior to running these cookies on your website.
SAVE & ACCEPT